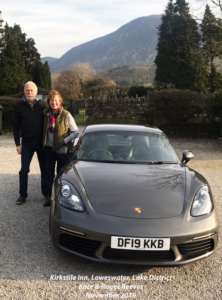 Treasure hunt winners enjoy their Porsche for the day..

The 2019 Cholmondeley Arms Car Treasure Hunt winners, the ‘Bickerton Babes’, Roger and Kate, are pictured enjoying their Porsche Cayman for the Day! Having won the Cholmondeley Treasure Hunt our great friends at Porsche Chester, generously supplied a Porsche Cayman 917 for the day as the winners prize! Looks like the ‘Bickerton Babes’ managed to get away for the day that’s for sure!

Look out for the 2020 Cholmondeley Car Treasure Hunt date and you too could be whizzing off in a Porsche for the day!

The annual Cholmondeley Arms Car Treasure Hunt 2019 was attended by 10 teams this year. The weather was ‘fair to middling’ as the dynamic duos took their places on the grid at 3pm before being sent off by Tim and Fliss with their clues under there arms….ready for a good hunt around the lanes of the Cholmondeley Estate and beyond.

Owner Tim had set the clues two days before but sadly could be there on the day because of a previous commitment. However Landlord Tim and Deputy Fliss were on hand to register the teams, hand out the clues and ensure every one left (and returned) safely.

After around a couple of hours the teams re-emerged unscathed, with no signs of falling out with each other….. which is always a positive!!

The papers were marked and Pub Plates were shared by the teams as they waited patiently for the results. Last year’s winner Phil was defending his title with a different partner in crime this year…his old friend Kit. But Phil just missed out as this years winners (Pictured) were the ‘Bickerton Babes’, Roger and Kate. They were presented with the Car Treasure Hunt trophy and their winning prize of a ‘Porsche for the Day’ kindly supplied by our kind sponsors Porsche Chester.
Well done to Roger and Kate and thank you to everyone who took part and donated too to our Air Ambulance Charity. See you all next season!

Car Club Meet 19, a great sign off to a great year!

Car Meet 19 (like Car Meet 17) had to be moved because of the weather to Sunday 20th October, as we welcomed over 40 cars at least to another great meet here at the Cholmondeley Arms. The weather wasn’t as forecasted, as showers hampered proceedings somewhat, but the turnout was fantastic for the time of year! Thank you to everyone who ‘rocked up’. It was great to see familiar faces along with some new cars and owners too. The owners gathered inside the Chum, in the main and enjoyed warming coffees and teas and of course the bacon butties. 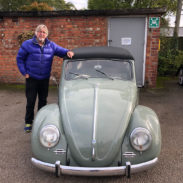 COLIN AND HIS VW BEETLE 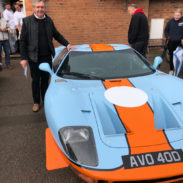 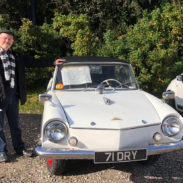 The Cars of the Day were Mike and his impressive Ford GT 40, pictured, then Colin and his unique VW Beetle who picked up ‘best in class’ and finally Terry in his amazing Amphicar 770 from 1962 which still doubles up as a boat at 7 miles an hour and a car at 70 miles an hour, hence the numbers after the name! This was ‘Cherished car of the day’.

Pictured as well, are all the cars (hope I didn’t miss anyone!) that kindly joined us for the morning. In the end the sun came out and all was well for the final meet of the season.

I just want to say how very grateful we are, for all the amazing support the car events have had this season. We have seen an array of wonderful cars in all aspects across the pubs, dating back to Veterans and Vintages and many Classics plus of course ‘performance’ and ‘cherished cars’ too. We look forward to some very special events next year. See you all next season. Events will kick of next April 2020.

Tim and the teams.

Car Meet 18 at Cholmondeley was up against Oulton Park with a Morgan race day plus another big car event at Capesthorne Hall, but nevertheless we had a good day, with over 40 cars ‘hitting the pits’ at Cholmondeley on a beautiful August Bank Holiday Sunday. So thank you to all the cars that turned up. The ‘Cars of the Day’ were Michael with his 1961 Austen Healey (Frog Eye version), Michael and Sue with their Jaguar S Type and Dave with his MGC Roadster which has been in the same family since new. Thank you to everyone for making our penultimate Car Meet another great success. See you at final meet of the season on Sunday 29th September 2019 once again at the Cholmondeley Arms and I will try and fix the weather for the final time!!.

Car Meet 17 had to be moved because of the weather to Sunday just gone as we welcomed over 60 cars at least to another great meet here at the Cholmondeley Arms. We recruited quite a number of new members and there was great banter amongst the ‘regular’ drivers who all enjoyed a good morning talking cars and admiring the cars of others. It was dry and warm and we got a great mix cars too. The Cars of the Day were Pete and young John with their beautiful Jaguar XK 140, Rob and his immaculate Volvo 1800s from 1968, Paul and Jackie in their Vintage Rolls Royce 2025 with a ‘Park Ward’ body from 1935 and ‘Best in Class went to Nigel and his 1955 TR2 all pictured below with all the cars and one motor cycle that attended the meet.

Nigel and the TR2

Paul and Jackie and the Rolls Royce

Rob and that Volvo
Thanks for supporting the day and apologies I was a little late!
Read More›
in car events 0 comments
May 27, 2019  by ballyboes

Crikey what a car meet!! Over 100 cars! Apologies to those drivers that struggled to get in to the event. It was a fantastic day and despite an early shower as I arrived at Cholmondeley it cleared up and became a lovely day for it! Thank you so much to all those that attended…and we were able to give out the Car Club ‘passports’ for the first time….thank you to Dave from the Fitz Car Club for the idea… on the day…. Our ‘Car of the Day’ was the classic Volvo pictured. The classic little Red Renault ‘van’ was one of the ‘Cherished Cars of the Day’ with John at the wheel and a Great Dane in the back was Tim the owners choice and Tim the manager of the Chum chose the immaculate Ford Escort as his ‘Cherished Car of the Day’.
Finally the Classic Red MG was voted ‘Best in Class’ and driven by John.

A great Car Meet to get the season started see you at the Fitzherbert Arms…next on 25th May.

Thanks again for supporting the day.

Car of the Day was this Volvo

The classic little Red Renault 'van' was one of the 'Cherished Cars of the Day' with John at the wheel and a Great Dane in the back! 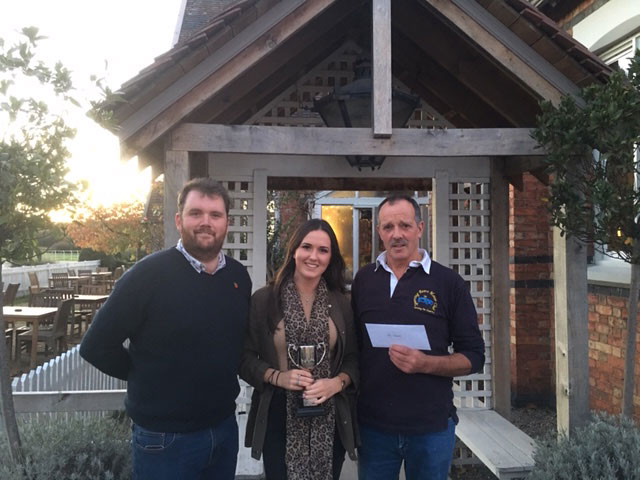 Phil and Molly this years winners with landlord Tim

Our Annual Car Club Treasure Hunt was a great success, 11 competitive teams set off in to the Cheshire countryside to enjoy picking up clues, a few photos and objects along the way too!

This year the trophy and Silverstone Porsche Day, donated by our Treasure Hunt sponsors Porsche Chester, was won by Phil and Molly, team ‘Chum Porsche’

Second place went to ‘The Cooper Troopers’ with Andy and Claire coming in a very close second place and winning a well deserved voucher to spend in the pub!

And as the race was so close we had a joint third prize, which was awarded to the ‘No Hopers’ and ‘Cheese Pie’. It was a great day, the weather held off and was enjoyed by all!

This now marks the end of the Car Club season here at Cheshire Cat Pubs…..we have really enjoyed hosting the three treasure hunts and they have been the best attended ever. Here’s to next year’s Car Meets, Safari’s and Treasure Hunts. Thank you for all your support and enthusiasm at all our pub Car events.

Fourth Car Meet of the year another success…..

Thank you to all our car enthusiasts who joined us for Car Meet 13 on Sunday July 22nd here at the Cholmondeley Arms our fourth of the year.

It was great to see more new faces in addition to our loyal following of Car Club Members. Quite a few Porsches made it for a little recognition of the 70th anniversary of Porsche.

Landlord Tim chose his ‘Porsche of the Day’, ‘Best Car in Class’ and ‘Cherished Car’ of the Day.

Congratulations to Tony who’s white 911 996 GT2 won Porsche of the Day against many other great Porsches present.

Best Car in Class went to Stephen with his Morgan 3 wheeler and ‘Cherished Car’ of the Day went to Steve with his 1986 Citroen 2CV. Each received Gift Cards and for Porsche owner Tony a special framed picture celebrating the development of the famous 911 presented by owner Tim. 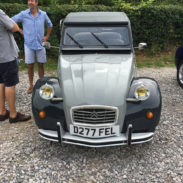 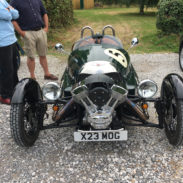 Porsche of the Day

It isn’t easy choosing winners on the day as there were so many great examples with a few vintage, plenty of classics, certainly some sports performance cars, as well as some great examples of cars that are truly cherished.

There will be one further car meet towards the end of August….. date to follow… where we will be giving each car club member attending a special ‘Passport’ to get stamped as they drive the six pubs of Cheshire Cat! This will be briefed in more detail later but was the idea of one of our members and it’s a cracking one!

We will also be working on some decent drive out days for next year too as we now have another member who is keen to start this with our support.

Please also look out for the ‘Car Treasure Hunts’ in late September and early October which are great fun especially the Porsches versus the Rest at the Bulls Head in Mobberley! Dates will follow.

Once again thank you for attending.

Cholmondeley Car Meet Season gets off to a cracking start! 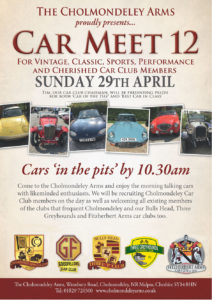 Thank you to all the car enthusiasts who joined us for Car Meet 12 on Sunday (April 29th) at the Cholmondeley Arms.

It was great to see new faces in addition to our loyal following of Car Club Members. We welcomed an excellent mix of cars on the day and some 70 cars turned up on a chilly but dry day which gets the car meet season off to a great start.

Owner Tim chose his ‘Car of the Day’ and ‘Best Car in Class’.

Congratulations to Lee with his beautiful blue MGA 1959 Mark 1 who took the ‘Best Car in Class’ and to Hugh and Sue who took ‘Car of the Day’ with their very rare 1985 E24 BMW M6 in truly amazing condition. They both picked up gift vouchers to use at the Cholmondeley Arms or one of our other pubs in Mobberley or Allostock. 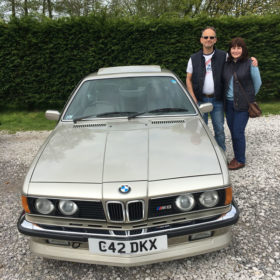 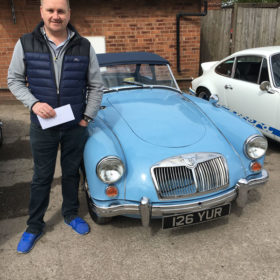 It was very difficult choosing winners on the day as there were so many great examples with a few vintage, plenty of classics, certainly some sports performance cars, as well as some great examples of cars that are truly cherished. Tim promises to make sure his car is a little cleaner next time!!

Car Club member Malcolm invites you to a ‘classic car breakfast meet’ on 20th May (details below) and we will be back with our next events on the Car Club events page as soon as we have fixed the dates. 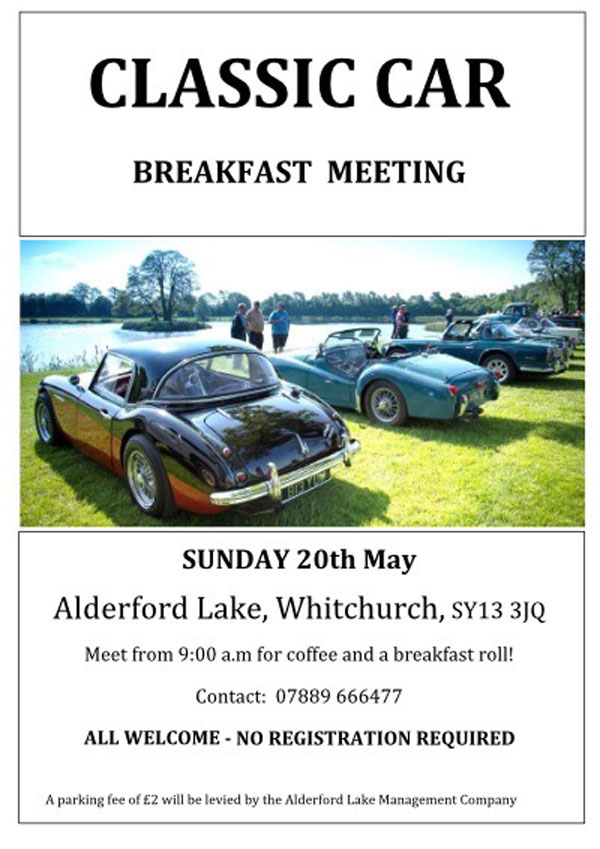 Each Year the South Cheshire Raiders enjoy breakfast at the Chum before their ‘drive out’ day and return in the afternoon for Pudding and a pot of tea.

If you are a car club and want to include Cholmondeley in your journey then get in touch with us.