The annual Cholmondeley Arms Car Treasure Hunt 2019 was attended by 10 teams this year. The weather was ‘fair to middling’ as the dynamic duos took their places on the grid at 3pm before being sent off by Tim and Fliss with their clues under there arms….ready for a good hunt around the lanes of the Cholmondeley Estate and beyond.

Owner Tim had set the clues two days before but sadly could be there on the day because of a previous commitment. However Landlord Tim and Deputy Fliss were on hand to register the teams, hand out the clues and ensure every one left (and returned) safely.

After around a couple of hours the teams re-emerged unscathed, with no signs of falling out with each other….. which is always a positive!! 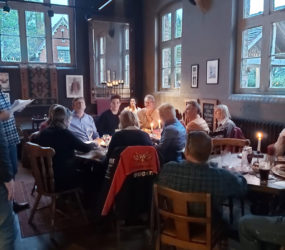 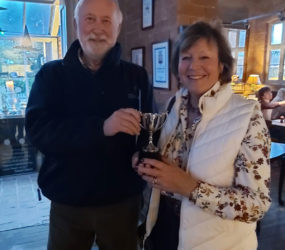 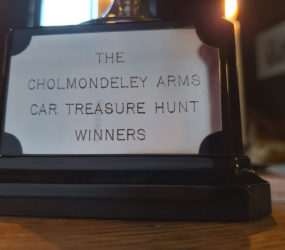 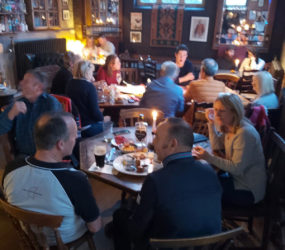 The papers were marked and Pub Plates were shared by the teams as they waited patiently for the results. Last year’s winner Phil was defending his title with a different partner in crime this year…his old friend Kit. But Phil just missed out as this years winners (Pictured) were the ‘Bickerton Babes’, Roger and Kate. They were presented with the Car Treasure Hunt trophy and their winning prize of a ‘Porsche for the Day’ kindly supplied by our kind sponsors Porsche Chester.
Well done to Roger and Kate and thank you to everyone who took part and donated too to our Air Ambulance Charity. See you all next season!