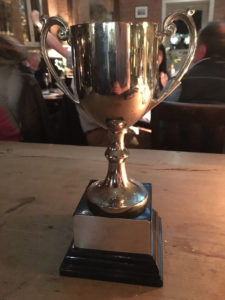 Tim was on hand to take the snaps and congratulate the winners as team captain of the Four Candles handed the trophy over to Team Gin+42!

Big thanks as always to Professor Ted our supreme quiz master! We couldn’t do it without you! The ‘Ted to Head’ final between the Cholmondeley Arms and Bulls Head happens at the Three Greyhounds Inn on Wednesday 25th May from 8pm.

Thanks to all the teams that took part in the quizzes over the last 6 months we will be back in September! 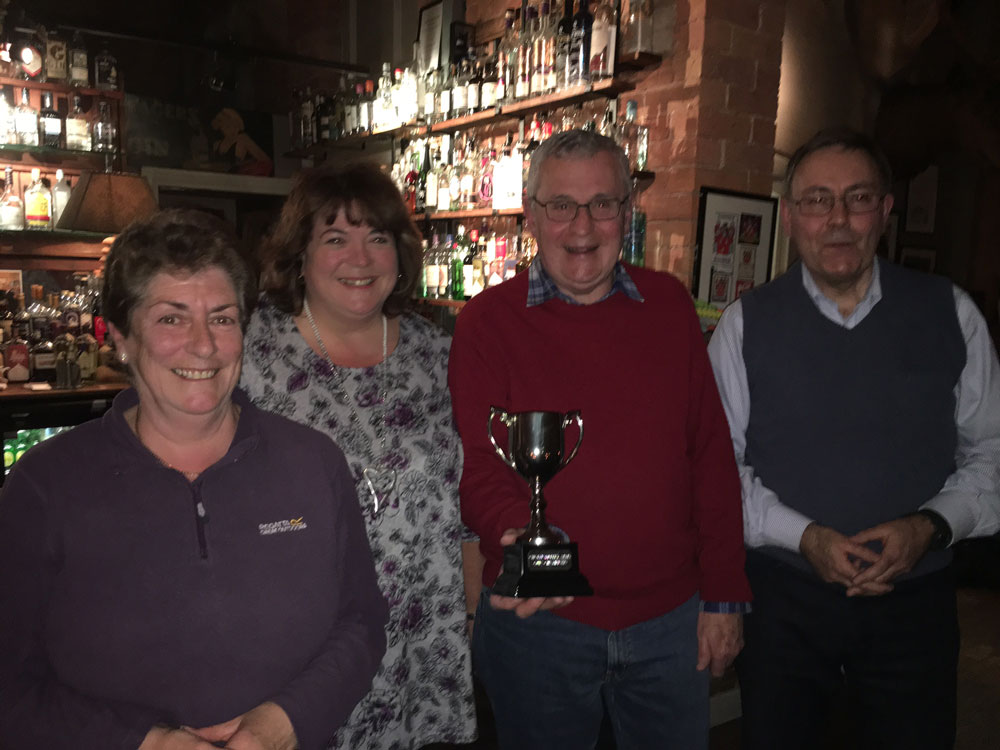 Cheshire Cats Pubs & Bars, who own and operate The Cholmondeley Arms on the Cholmondeley estate, The Bulls Head and Church Inn in Mobberley, the Three Greyhounds Inn in Allostock, the Fitzherbert Arms in Swynnerton and the Red Lion in Weymouth, Dorset, has been voted the company with the Best Drinks Act in the UK at the prestigious Publican Awards ceremony in London.

Cheshire Cats Pubs & Bars beat a number of national chains to the title, drawing high praise from the judges for supporting cask ales from local brewers. The company was also awarded a ‘Highly Commended’ title in the Best Food Offer category.

Each pub within the collection specializes in a particular drink with The Cholmondeley Arms boasting more than 300 gins, the Red Lion offering more than 80 rums and the Fitzherbert Arms offering over 30 Ports by the bottle. Whiel the Bulls Head, Three Greyhounds Inn and the Church have enviable collections of Whisky, Brandy and wine respectfully.

Tim Bird, owner of the unique collection of village pubs and country inns, comments: “These awards are equivalent to the drinks industry’s ‘Oscars’ and it is fantastic that our pubs and our teams has been recognized in this way. The award recognises the hard work that the team puts in and how we work with local breweries, suppliers and food producers to bring a memorable and unique experience to our customers everyday.”

Ed Bebbington, of the Publican’s Morning Advertiser, comments: “This is a company that puts a lot of time and thought into getting its drink offer right, from its superb focus on local, great beers, through to an impressive offer of wines and spirits.”

Tim Bird and Mary McLaughlin, owners of Cheshire Cat Pubs & Bars, have already won numerous awards for restoring pubs of great heritage and character and are now focused on the Roebuck Inn, also in Mobberley which after three years of closure is set to open in April.

For further information on Cheshire Cat Pubs and its collection of pubs, please visit www.cheshirecatpubsandbars.co.uk. 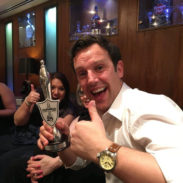 Barry from the Bulls Head gives it the big thumbs up 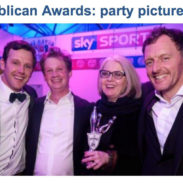 Barry, Simon, Mary and James are delighted with the win 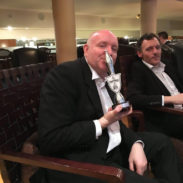 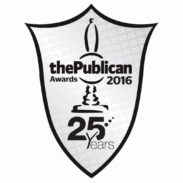 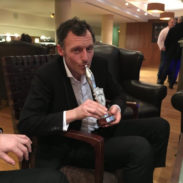 James from the Three Greyhounds Inn celebrates with a kiss 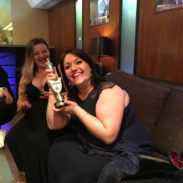 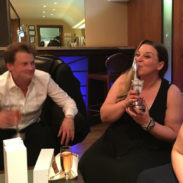 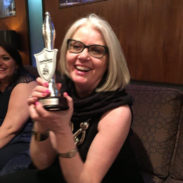 Mary is delighted and proud indeed for all the teams 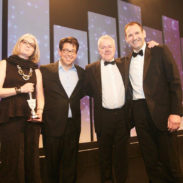 Mary with the trophy and comedian Michael Mcintyre, Tim and Simon from Coca Cola the sponsors of the award 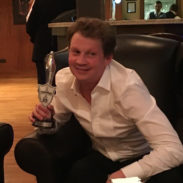 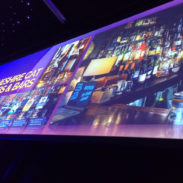 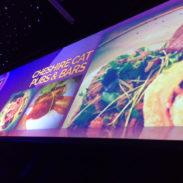 The Big screens reveal the nominations 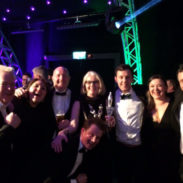 The Team celebrate the huge win after the awards presentation 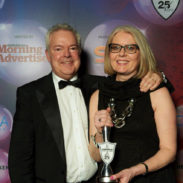 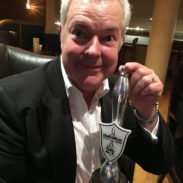 Tim is stunned and so proud of the team
in News 0 comments
January 25, 2016  by ballyboes 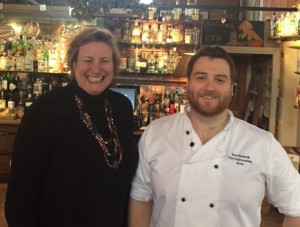 Eddisbury MP Antoinette Sandbach has nominated Tom Richards, the head chef from our award winning Cholmondeley Arms, for a prestigious Westminster Pub Chef of the Year Award after visiting us.

Antoinette Sandbach, commented “I have always enjoyed visiting the Cholmondeley Arms and sampling their seasonal menus. Tom has always delivered good locally sourced food that is bursting with flavour so when I found out about the competition I had to enter Tom. I wish him the best of luck.”

Tom Richards joined the Cholmondeley Arms two years ago and with his team of four chefs has consistently demonstrated a real passion for flavoursome cooking.

Mary Mclaughlin our owner added “Tom has been a key member of the team at the Cholmondeley Arms and we’re thrilled to see that his work and passion for local quality food has been recognized in this way.”

We are delighted to announce that we are now featured as a recommended place to stay on www.InnPlaces.co.uk, an innovative new website featuring Britain’s best inns and pubs with rooms.

Designed for travellers who really appreciate quality, InnPlaces.co.uk offers on-line accommodation booking as well as detailed and current information on each featured inn, unique Food Trails and extensive Out & About information – everything you need to know when searching for that special break away.

Follow this link to www.innplaces.co.uk  and by signing up to the Inn Places newsletter found on the Inn Places home page you could be the lucky winner of £150 of Inn Places Gift Vouchers. 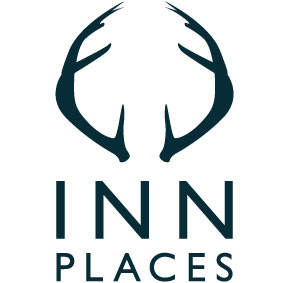 At a glittering dinner at Chester Racecourse in late November we are very proud to announce that the Cholmondeley Arms was chosen as the ‘Tourism Pub of the Year 2015/16’.

The judges reflected on our consistent food and drinks offer particularly the work done to attract more people to Cheshire via our work with Gin and of course the success of our annual ‘Gin Fest’, plus our Bonfire night, our Annual Gin Appreciation homemade gin competition, our Cholmondeley Car Club, the investment in the Headmaster’s House Bedrooms, our Dog Friendly coverage in the Telegraph, plus maintaining our presence in all the guides.

The Cholmondeley Arms is a unique pub with lots to make one happy and it is a great rural meeting place. This award was gratefully received by our manager Jess and owner Mary who were delighted that the ‘Chum’ has at last been recognised for the efforts made to promote its position on the Cholmondeley Estate and in Cheshire as a whole. 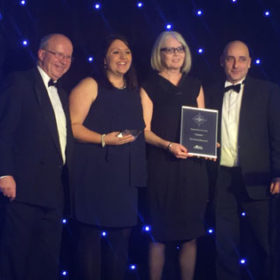 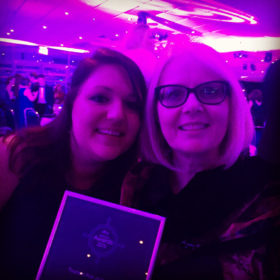 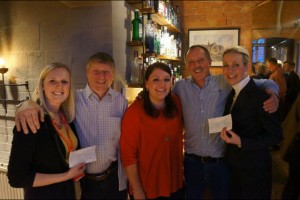 Local Chum regulars Kit and Phil did a cracking job with the 2015 Cholmondeley Charity shoot in April. The event attracted a great deal of support and with fair weather was a great success with the shoot raising a record £3600 split equally between the Air Ambulance and Hope House with £1800 each. The charity shoot is an annual event so do join us in 2016. A big well done to Kit and Phil and all the rest of the locals with Jess and the Chum team for all their hard work! 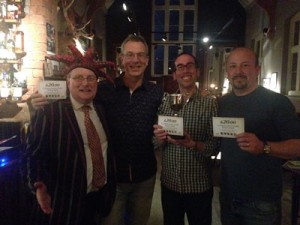 Every month the winning quiz teams are awarded points to join the leader board, the season runs from October to April. At the final quiz of the season double points are awarded to the top 5 teams. There were four teams that were all in contention to be crowned leader board champions.

After a very exciting quiz, the scores were announced… The winners of Tuesdays quiz were a new team, despite their best efforts they were unable to budge the ‘Four Candles’ from the top of the leader board. Each team member won a £20 voucher and the whole team won a gin tasting. 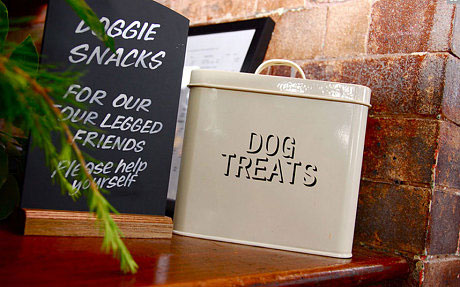 For the second time in less than a year the Daily Telegraph Travel section has put the Cholmondeley Arms in the top ten places to bring your dog this time we are featured in the Top Ten Hotels around the UK.

This former Victorian schoolhouse-turned-inn is as stylish as Beau Brummell inside. The glorious carved oak bar dominates the main hall and apart from the malted charms of Cholmondeley Best Bitter and Merlin’s Gold, there are a staggering 200 varieties of ruinously good gin to discover. Your faithful friend will not go thirsty either, as dog beer (made from meat stock) is readily available. Food is hearty and delicious and rooms in the old headmaster’s house behind the inn are calm, civilised and comfortable. Three of them are dog-friendly, and dog beds are supplied too. 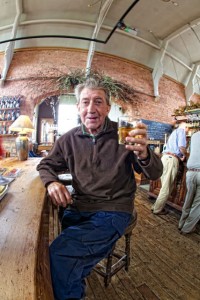 We are sorry to announce that our loyal gardener and occasional raconteur Johnny O’Shea has passed away after a long illness. Johnny will be fondly remembered by us all here at the Cholmondeley Arms. In the summer when the beautiful roses grow around the ‘Chum’ we will think of Johnny and all the time he spent making everything look so beautiful.

Many visitors to Cholmondeley will remember Johnny and the stories he would tell over a ‘wee dram’. He was once asked where do you want to be in ten years and his answer was simply to be in the Cholmondeley Arms with a smile.

Johnny raced Greyhounds and at the opening of our Three Greyhounds Inn pub Johnny and his wife Anne made the trip specially from Cholmondeley with three real greyhounds to help us celebrate the opening.

God bless you Johnny, Cholmondeley won’t ever be the same without you.

ITV enjoy their wrap party at the Chum!

For four long months ITV have been filming down the road in Bunbury and the crew and cast have stayed with us here at the Chum in our Headmasters House bedrooms. They have enjoyed relaxing at the pub and dining with a very occasional Gin and Tonic after a very hard day’s work on set.

Where else would they chose for their ‘it’s a wrap’ party than the Cholmondeley Arms and a marquee went up for the whole cast and crew to enjoy a little Christmas cheer early and finally relax after a job well done!

Bunbury had been the setting for the six-part Second World War drama ‘Home Fires’, starring Francesca Annis and Samantha Bond and produced by ITV Studios. It tells how members of the Women’s Institute hold the fabric of society together while their menfolk are away fighting.

Filming began in September and continued until December, with some of the villagers appearing as extras.

With a screenplay by Simon Block, who penned shows including Lewis and Casualty, the drama is inspired by Julie Summers’ book ‘Jambusters’ and is set to air on screens sometime in 2015.

Bunbury residents were informed of the news by leaflets posted through their doors explaining how their village would be affected by the filming, and also giving them the opportunity to feature in the show as extras.

“The women are real and engaging and have fantastic spirit and attitude. With World War II on the horizon, multiple strands of plot interweave to create a period drama full of jeopardy and intrigue, but also great humanity and modernity.”