GOING FOR THE TREBLE!

We are very excited to announce that Cheshire Cat Pubs and Bars have been nominated for three very prestigious awards at the 2019 Casual Dining Awards, taking place in London on Wednesday 27th February. We feel very honoured to be nominated for two such special awards as ‘Employer of the Year’ and ‘Multi-Site Operator of the Year’ and are also very proud to announce that the Cholmondeley Arms has been nominated for ‘Pub of the Year’. Our owners, Tim Bird and Mary McLaughlin, are heading off to the Big Smoke as guests of our excellent wine suppliers, Boutinot, to attend the awards ceremony, and we will keep you posted on the results of our nominations.

Cholmondeley Arms invited to take part at Pub in the Park!

Pub in the Park is taking place this year across eight locations nationwide, including the Lambing Shed at Knutsford from June 7 to 9. Hitting eight foodie destinations with almost 30 pubs taking part, revellers can expect top class pub grub with local flavour, with special appearances from celebrity chefs. The other pubs set to appear at the Lambing Shed are The Hardwick, The Star Inn, Our ‘sister pub’ The Church Inn taking part for the second year and Café Muran. Tom Kerridge will be bringing his chef mates to the party for a relaxed and intimate gathering, supporting and celebrating local talent, as well as presenting some of the biggest names in food and music, with music acts to be announced later this month. We look forward to seeing all our customers there!

CHOLMONDELEY ARMS NAMED AS GIN PUB OF THE YEAR 2019 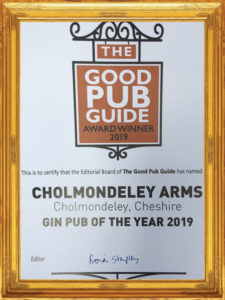 Award-winning country pub The Cholmondeley Arms, near Malpas in Cheshire, has been awarded the prestigious title of ‘Gin Pub of the Year 2019’ by The Good Pub Guide. The award category, introduced for the very first time this year, was added to recognise the increasing number of pubs now stocking an impressive selection of gins.

With a staggering collection of more than 400 gins, The Cholmondeley Arms was deemed a very worthy winner. The award recognised the Cholmondeley’s seven-year focus on gin, the pub’s hugely popular annual Gin Fest, which is now in its fifth year, as well as their regular Saturday Gin Classes which continue to soar in popularity. The award also comes in the very month of the seventh anniversary of owners Tim Bird and Mary McLaughlin’s re-opening of the pub after extensive investment and refurbishment.

Tim Moody, General Manager of the Cholmondeley Arms, comments: “We’re proud and delighted to have been awarded the title of ‘Gin Pub of the Year for 2019’. Gin has always been our favourite tipple and being recognised with such a prestigious award is a real boost for the whole team who have worked so hard to bring ‘Gin to the Inn’ here at the ‘Chum’. I’d like to say a big thank you to our excellent team and also to our loyal ‘gin loving’ customers – we couldn’t have done it without you all.”

We are very proud to announce that the Cholmondeley Arms has won ‘Dining Pub of the Year 2018’ at the Cheshire Life Food and Drink Awards 2018 at Carden Park Hotel near Chester.

Big congratulations go to our General Manager Tim and the entire Cholmondeley team.

Tim attended the awards presentation with Tom our Head Chef and Fliss our Deputy Manager.

Hard work and passion has persevered… 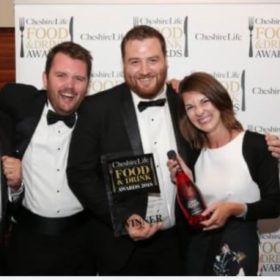 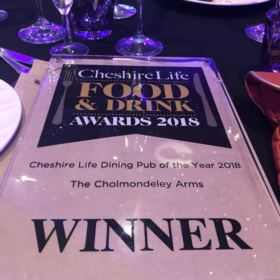 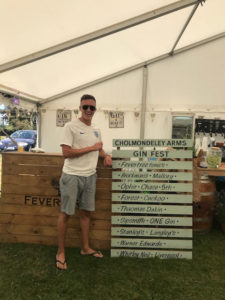 Last weekend has been a fantastic festival of gin, with a record breaking weekend, bigger and better than previous years!

With crowds coming to spend their weekend at the Cholmondeley sipping different gins from the outside bar, enjoying our BBQ with delicious stone baked pizzas! And dancing the night away to a great line up of live music all weekend.

Not only that but history was made on the Saturday as England beat Sweden in the World Cup Quarter Finals! This will be the first time in 28 years they have made it to the Semi finals! So we are happy to say it was a ‘Gin Gin Situation’.

This past weekend has been a true ‘GIN’spiration of what’s to come! We hope to see you all at Gin Fest 2019! 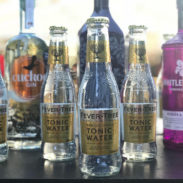 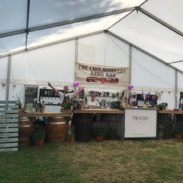 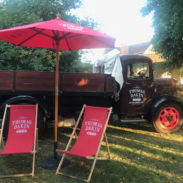 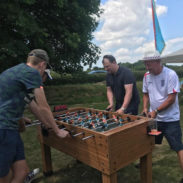 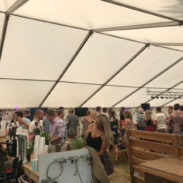 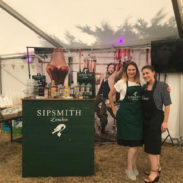 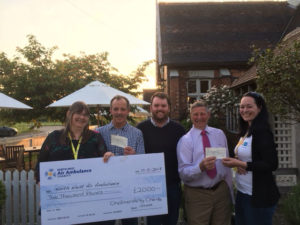 Kit Hopely, Phil Probin and the big band of Cholmondeley Arms locals raised an amazing £4000.00 which has be shared, equally, between North West Air Ambulance and Hope House Children’s Charity.

A big well done and thankyou to them for organising another brilliant shoot day this year!

‘Chum’ appears to have real ‘pedigree’ in dog friendliness!! 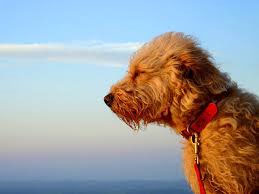 So now it’s official! The Cholmondeley Arms (‘Chum’) has been recognised by three national newspapers in the space of six weeks as a great place to bring your pet dog! The Guardian’s latest take is linked here below….we have featured in the Independent and the Telegraph too. Voted in the Top Ten Pubs in the UK three years running! Nowadays our chefs bake the biscuits for the dogs staying with us….a gourmet treat…and we have Cholmondeley Arms blankets that one can buy their Pooch as a lasting memory of their favourite pub! Dog Beer is available to toast ones Master as well as a bed or two to sleep it all off! The Chum…..a real howl! 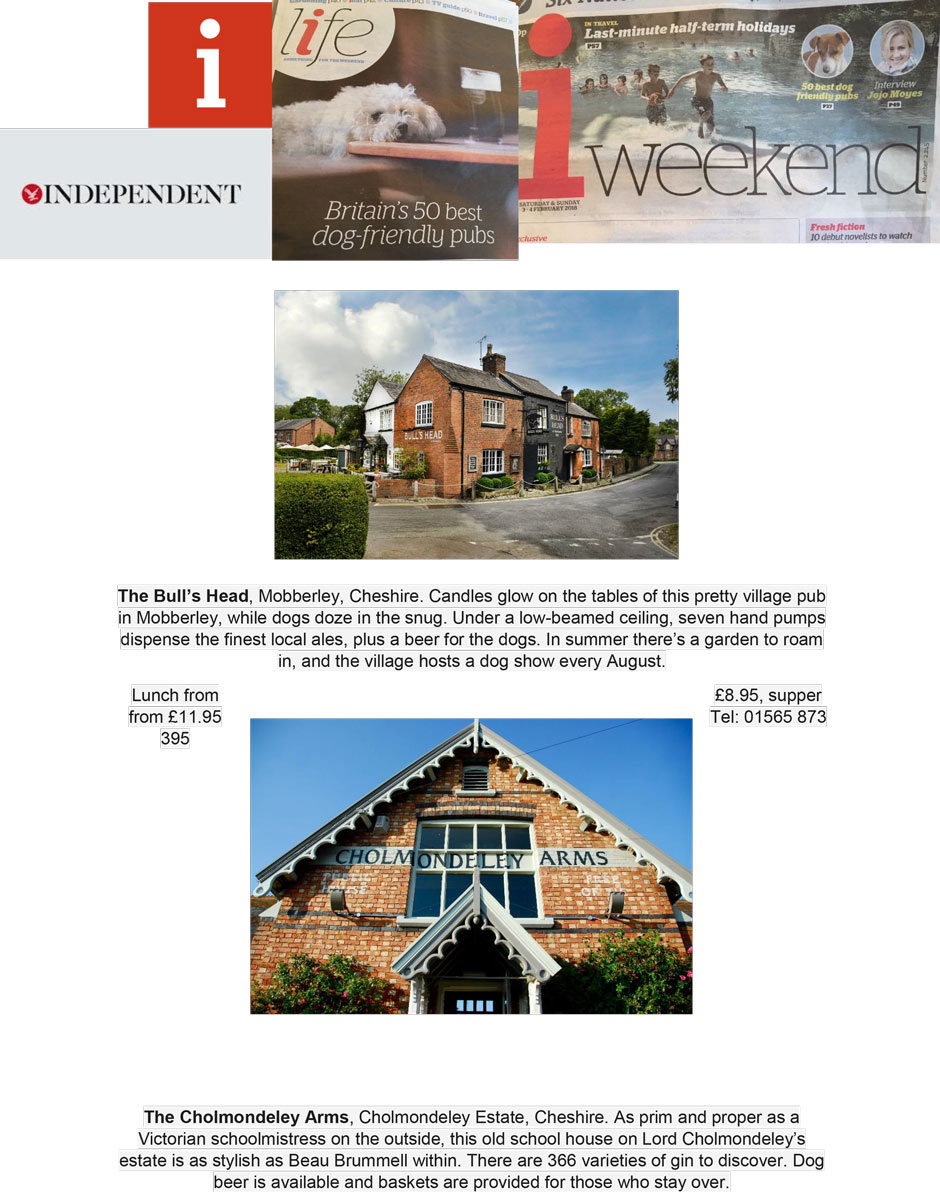 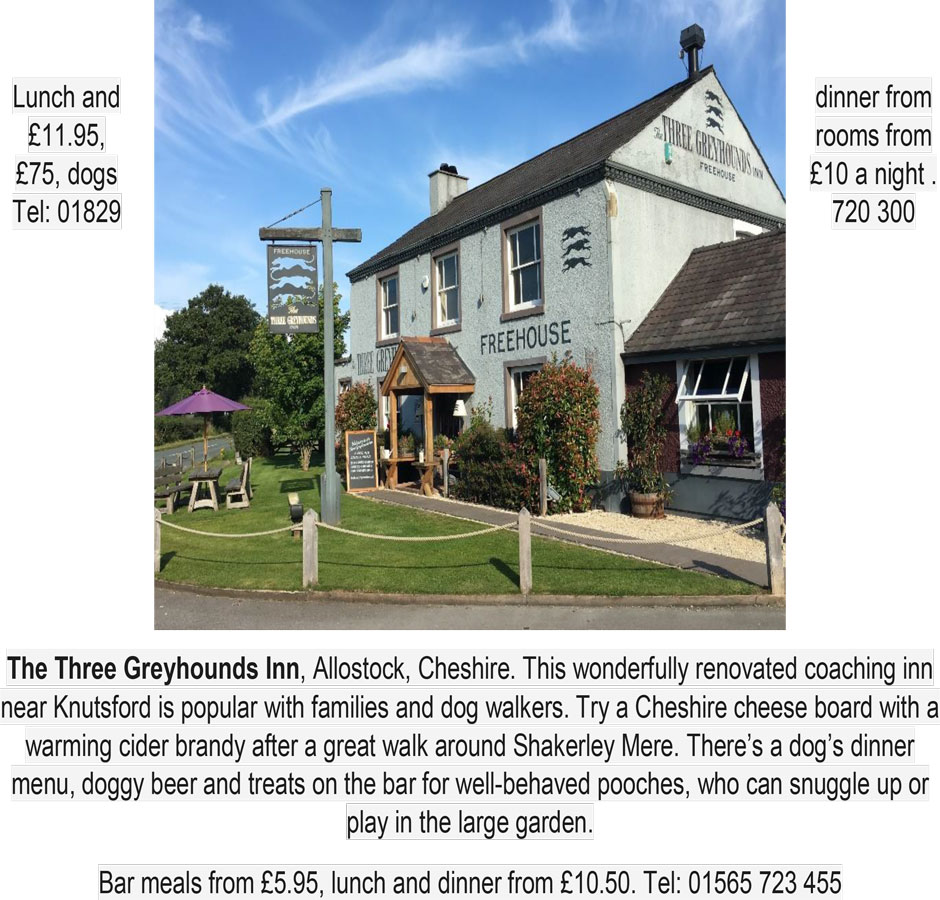 The top movers and shakers of the UK drinks industry gathered last night in London to hear the results of the Imbibe Personality of the Year Awards 2018.

The nominees were voted for by Imbibe magazine’s readers in record-breaking numbers and the shortlist included the highest calibre of UK on-trade professionals.

Tim Bird, co-founder of Cheshire Cat Pubs & Bars picked up the award for Pub Personality of the Year.

Imbibe editor, Chris Losh, commented: ‘Tim has worked in the industry for over 35 years, and since he’s saved many pubs from closure in that time, it’s safe to say the UK’s pub scene would not have been the same without him.

‘He’s proved himself amazing at running everything from big pub groups to small independents, and, for the last seven years, his own group of country pubs and Inns. This passion for the industry is exactly what Imbibe Magazine is all about’. The 2018 awards were presented on Monday 12th February at Mahiki Kensington.

Launched in March 2007, Imbibe magazine has rapidly become the UK’s leading magazine for on-trade drinks professionals working in premium UK establishments. Imbibe is a quarterly magazine, with more than 20,000 drinks buyers and servers in the UK receiving a copy. Copies are available upon request.

Our Owner Tim is Pub Personality of the Year 2018! 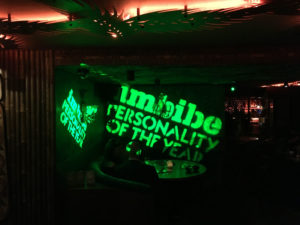 Imbibe Magazine is the UK’s leading drinks magazine and tonight at their annual awards in London our owner Tim was chosen as ‘Pub Personality of the Year 2018’.

Tim was up against some of the pub industry’s top talent on the night, but the judges not only looked at Tim’s vast experience in the industry but particularly the success of Cheshire Cat Pubs and Bars, Tim’s company that he operates with his wife and business partner Mary McLaughlin. They have taken pubs that were either closed or close to closure and through their restoration have created one of the best small pub companies in the UK!

On winning this prestigious award, Tim thanked the team at Cheshire Cat…..”I have had many proud moments in my career but nothing has made me prouder than the achievement of our pubs. Starting our own business was the best thing we have ever done and tonight I share this award with Mary and the Cheshire Cat team! I would like to thank Imbibe Magazine for giving me one of the proudest moments in my career! I look forward to celebrating with the team!” 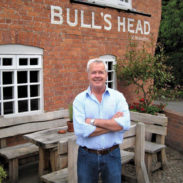 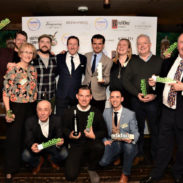 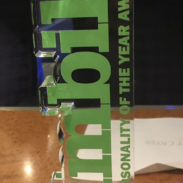