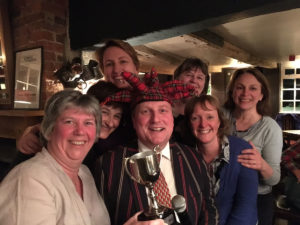 At the end of May teams from the Bulls Head and the Cholmondeley Arms went ‘Ted to Head’ in the grand final of Lord and Professors Ted’s great pub quiz.

The overall Champs on the night were the two year champs from the Bulls Head…..Ted’s Tarts! Well done ladies

They have already won a wine tasting at our Church Inn for the team as well our pub vouchers.

For winning the grand final there is a table for the team waiting for them to enjoy a supper on us. At a pub of their choice.

Thanks to Ted for all the great quizzes of the season and we look forward to welcoming him back at the end of September.